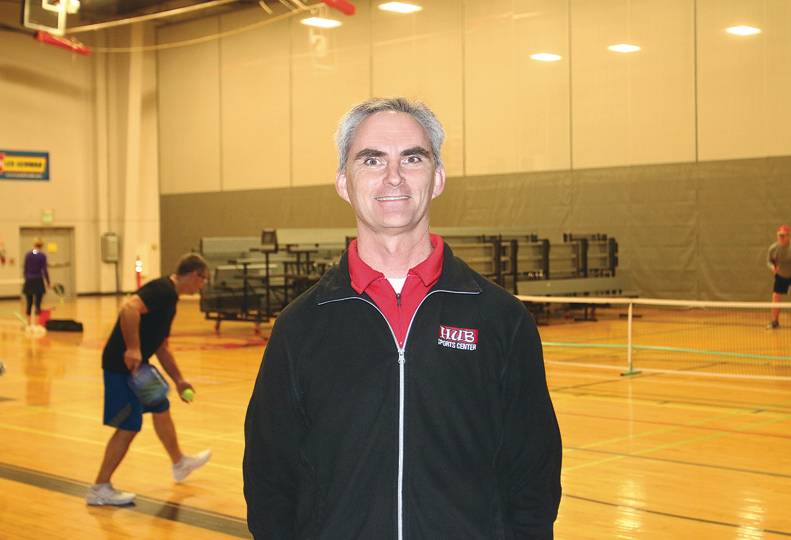 After more than a decade with an uncertain future, the 67,000-square-foot Liberty Lake-based HUB Sports Center is on stronger financial footing than it’s ever been, contends Phil Champlin, the sport venue’s executive director.

The Inland Northwest Community Foundation announced late last month that it had sold the facility, located just east of the Barker Road-Interstate 90 interchange at 19619 E. Cataldo, to HUB Sports Center, the nonprofit organization that operates the facility.

The transaction ends a seven-year transition that started when an anonymous donor created a fund at the INWCF in 2011 to support youth programs and other charitable causes. The donor requested that the fund’s first disbursement be used to purchase the HUB building.

In 2012, the foundation established a supporting organization to buy the facility for $3.2 million from Spokane-based Ted Williams Partnership and Garco Construction Inc, which owned the HUB building and surrounding properties, with the intention of giving the HUB organization time to raise funds to purchase the building eventually for roughly the same amount. The funding plan gave the HUB a chance to become financially self-sufficient by increasing events while concentrating more on fundraising efforts.

“They were a lifeline so that we could become a permanent resource for this community,” says Champlin.

Champlin says he still doesn’t know who the individual, or group, actually is.

“I have my suspicions about whoever that person is,” Champlin says. “But it’s okay if I don’t know. There’s a reason they chose to remain anonymous, and we want to respect their wishes. At the same time, I want to say to them, ‘thank you.’”

After the donation, the HUB paid minimal rent to the foundation while raising money from private donors and securing government grants, Champlin says.

With a staff of three full-time employees, including Champlin, and seven part-time workers, it costs an average of $45,000 a month to operate the HUB, he says.

Last December, the HUB made a $1.6 million payment to the foundation. It expects to make another $1.3 million payment by the middle of this year and is still trying to raise the final $300,000, he says.

Meanwhile, the money from the HUB’s purchase of the building will be placed back in the anonymous donor’s fund to be recycled for other charitable causes, he says.

In a press release, foundation CEO, Shelly O’Quinn, says, “The generosity of the anonymous donor, together with the HUB’s perseverance to raise funds to purchase the building, ensures the community has a great multi-use facility for years to come.”

Built in 2003, most of the HUB’s years have been shadowed in uncertainty, Champlin says.

Kert Carlson developed the idea of the HUB in the early 2000s when he was the projects originator and managing partner of Carlson & Associates LLC investment group here. Spokane-based Garco Construction Inc., provided design-build services on the project. A nonprofit organization, named Sports-USA, was created to manage the facility.

The facility was built in large part due to Carlson’s desire to provide more play and practice space, mostly for youth basketball and volleyball players. The HUB was also rented out to sports organizations, including recreational adult sports leagues.

The HUB’s main level has 56,500 square feet of space, with enough room for five full-court basketball spaces that can be converted to 10 volleyball courts. A 10,500-square-foot mezzanine level has office space, locker rooms, a conference room, and space available for fitness classes and workouts.

Champlin, who’s served as executive director since 2010, says from the outset the HUB struggled to do business despite the fact there was a need for such a facility.

“I’m not entirely clear why, but after a year-and-a-half, it was closed,” Champlin says. “It was closed from 2005 to 2007 and eventually almost turned into a warehouse.”

Spokane’s chapter of Upward Sports, a Christian-based organization that operates sports leagues, reached out to Carlson & Associates, which reopened the facility in fall 2007 to help Upward due to a lack of available gym space in the area, Champlin says.

Finally, in about 2009, a five-member board of directors made up of local business representatives, clergy members, and athletic organization representatives formed the HUB Sports Center nonprofit to take over its operations, again recognizing a need to create more opportunities for area youth, he says.

“Their collective heart was for the youth of the community,” he says.

But the question of how the HUB could survive constantly remained.

“It’s hard to approach sports organizations and tournament organizers with the pitch of, ‘We should be open when your event occurs,’” he says. “Right away, we had to ask if this place was going to make it.”

From May 2010 to the following year, the nonprofit secured a line of credit in the amount of $100,000 and used it to help cover operating costs.

Champlin says that was just enough to keep the facility going before the anonymous donor came through.

“Truthfully, I get a little emotional when I think about how this all happened,” he says. “The donation has allowed us to have six straight years of positive cash flow, and we now have $100,000 in an emergency reserve fund.”

The donation has helped the HUB continue HUB 360, an after-school homework program for identified at-risk middle school students in the Central Valley, East Valley, and West Valley school districts. Students receive tutoring assistance from volunteers and time is set aside for exercise until a parent arrives, he says.

Champlin says about two-thirds of the students participating receive free-or-reduced lunch and up to a third are from single-parent homes.

Currently, the HUB has plans to host an all-star girls’ volleyball tournament during the first weekend of May featuring the top high school players from around the region, Champlin says.

HUB staff and community volunteers also are working to put together a Native American basketball tournament in June, which will also serve as a community fair with the intention of providing resources about how to gain access to educational and vocational training as well as touching on lifestyle topics related to wellness and fitness, he says.

The HUB also has been working with police departments in Liberty Lake and Spokane Valley to help form a recreational youth basketball league during July. The idea is to use volunteer police officers to help run the league and provide young athletes with exposure to law enforcement in a positive context.

“The more opportunities we can present, the better off our community will be. And we’re always actively seeking out partnerships,” he says.

Reporter Kevin Blocker, a University of Colorado alum, is a rec league basketball addict. At age 47, he still sports a 32-inch vertical leap. He has three children, all of whom are hooked on hoops.

CLICK HERE FOR REGISTRATION Our children’s Taekwondo program is geared towards the development of discipline and self-esteem. As they progress we will focus on leadership qualities and skills as well. Our unique program strives to teach children skills that prepare them for life, as well as self-defense techniques enabling the child to defend him/herself when[...]
8:00 pm Badminton Drop In
Badminton Drop In
Jan 26 @ 8:00 pm – 10:00 pm
Up to 3 nets of play.  Some shuttles and rackets are provided, but you can bring your own.
Jan
27
Fri
9:30 am Fit for YOUR Life Exercise Class
Fit for YOUR Life Exercise Class
Jan 27 @ 9:30 am – 10:30 am

This league is designed to be more competitive than the YMCA recreational league, yet still provides a positive experience for all. Coaches register their team, schedule their own practices and teams provide their own uniforms. Teams will play 8 games during the season (unless forces out of our control occur) and end in a seeded,[...]
Jan
28
Sat
7:00 pm Warrior Camp MMA Event
Warrior Camp MMA Event
Jan 28 @ 7:00 pm – 10:00 pm

Beginning January 1, 2023 – Open Play prices will increase. $5.50 if you register online or $7.00 at the door. Register here for Open Play Pickleball. Save time and money by using our online registration to sign up for Open Play Pickleball! By signing up online you guarantee your spot and can “fast pass” your[...]
View Calendar
Add
SEO Tools byWeb Design and Development | Roundbox